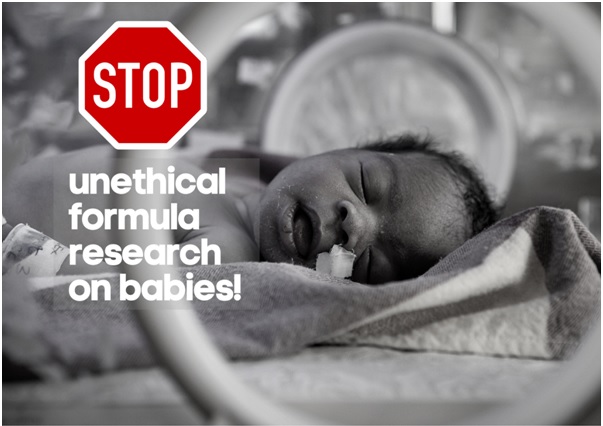 IBFAN is calling for an immediate halt to a new study * –  funded by the Gates Foundation and led by researchers from the University of California – that is randomly allocating infant formula to exclusively breastfed low-birth-weight babies in Uganda and Guinea-Bissau assuming that this might prevent wasting and stunting.

The study, uses ready-to-use infant formula made by Abbott, a major violator of the International Code and WHA Resolutions that is currently at the centre of a media storm in the USA over the contamination of its powdered formula. While the study brings the #BlackLivesMatter movement to mind it also shows how concerns about ‘wasting’  ’stunting’  and ‘poor growth’ can be used as a humanitarian ‘cover’ for the expansion of the baby food market, already estimated to be worth $55 billion. (NB: The trial in Uganda used purchased  Abbott formula, a Ready-to-Use version of same brand of powdered formula that is being recalled in the USA and New Zealand.)

Although the researchers claim to follow ethical standards  and be passionate supporters of breastfeeding, the study seems to be in blatant disregard of key sections of the Declaration of Helsinki. that call for particular protection in vulnerable populations. The study overlooks the major health protection provided by exclusive breastfeeding and the serious risks associated with formula feeding of premature and low birth weight babies. These risks include life threatening Necrotizing Enterocolitis (NEC) and formula’s negative impact on the microbiome. (Abbott is facing lawsuits over the deaths of children from NEC and its failure to adequately warn of risks of formula feeding.) Exclusive breastfeeding from the mother, or breastmilk from wet-nurse or donated, is now universally recommended.

By choosing to ignore the social and economic realities of African families and conducting this study amongst health illiterate populations – the researchers have turned the concept of “informed consent” on its head.  Over 330,000 babies die every years in Africa because of inappropriate feeding.  The babies in the Uganda trial were also fed by bottle and teat (rather than by cup) and Kangaroo Mother Care, already a routine in the research site, was not supported or encouraged.

A recent review of formula trials found an almost universal lack of transparency, biased, selective reporting,  increasing use of formula at sensitive periods of development and lack of scientific rigour.

*Randomized controlled trial of early, small-volume formula supplementation among newborns: A study protocol -Amy Sarah Ginsburg et al. PLoS One. 2022.  The study was approved by research ethics committees in California, San Francisco, Uganda and Guinea Bissau. One of the researchers declares funding by Danone (world’s 2nd largest formula company).
** The study claims to be conducted in accordance  with the Declaration of Helsinki 2008 but seems to be in blatant disregard of its key sections, which state: “.. Some research populations are vulnerable and need special protection. The particular needs of the economically and medically disadvantaged must be recognized. Special attention is also required for those who cannot give or refuse consent for themselves….Physicians should cease any investigation if the risks are found to outweigh the potential benefits or if there is conclusive proof of positive and beneficial results.”

If you agree that this study is a violation of child rights please sign the Petition and  send a message to the following places:

Latest science further protects infants The European Food Safety Authority (EFSA) published its final guidance on 31st May on the assessment needed for  food for babies under the age of 16 weeks.  Following a consultation EFSA maintains the requirement for an extended one … Continue reading

Over 20 comments have been submitted online to the PLOS  Journal, along with inadequate responses from the researchers:

Here is the latest from the Academy of Medicine.

“Given our concerns …. it is difficult to imagine a situation in which this study and any others like it would not lead to further adoption of unhealthy practices and exploitative marketing”.  The Academy of Breastfeeding Medicine, Board of Directors.

As an organization committed to promoting, distilling and disseminating evidence-based knowledge and research that improves clinical care and is diverse, inclusive, translational, and globally accessible, we at the Academy of Breastfeeding Medicine have significant concerns regarding the design and potential health implications of this study.
Not breastfeeding or partial breastfeeding creates the potential for immediate and longer-term health consequences for both mother and child. Particularly, infants who are not exclusively breastfeeding have higher rates of death in the first year and heavier infectious and diarrheal disease burdens, which themselves may lead to growth failure or stunting or worse. The earlier the introduction of anything other than mother’s milk, the higher the diarrhea burden. While we acknowledge that childhood undernutrition is a major public health problem worldwide, a preponderance of data exists confirming that mothers’ milk is the optimal nutrition for infants in the first six months and that the nutritional content is preserved except in extreme instances of severe malnutrition.
This study protocol raises multiple questions with important health implications that need to be addressed prior to any expansion of this effort and/or publication of any results. An extensive ethical review that considers these questions is imperative prior to the responsible dissemination of these results or widespread implementation of these practices. Doing otherwise, could at best lead to the growth of unhealthy practices, and at worst, to the exploitation of a vulnerable and already at-risk population. We propose that the following questions be extensively and thoughtfully considered and the ethical implications scrutinized prior to any further expansion or publication of this work:
1) Evidence clearly demonstrates that exposing preterm or low birth weight infants to anything other than mothers’ milk poses risk. Do the risks of infections and significant morbidity and mortality truly outweigh the benefits? Or, is there a prioritization of growth vs. overall health and survival? The size of the study would make it difficult to measure the impact on overall mortality, and while the risks are acknowledged in the protocol, the health outcomes of the study do not reflect all of the conditions for which there may be concern.
2) The study assesses maternal nutritional status by anthropometric measurements and calculating BMI; however, the intervention does not address maternal depletion. Why are measures to enhance and support maternal nutrition not considered?
3) It is widely known that the early introduction of infant formula is a risk factor for early cessation. What are the implications of shorter duration of breastfeeding and non-exclusive breastfeeding in this specific population? What interventions will be provided that ensure that human-milk feeding is maximized?
4) Why is a cutoff of 2500g birth weight used rather than defining risk categories based on birthweight distribution in this specific population? This birth weight range is likely to include late preterm infants that invariably are born with low birth weights appropriate for gestational age. Late preterm infants may or may not require supplementation other than mother’s milk.
5) To what extent might routine early introduction of formula, even in mothers of higher socioeconomic status, undermine a mother’s confidence in her ability to breastfeed and take the best care of her infant?
6) Will other mothers, in a less controlled, study setting have access to 2oz. bottles of pre-mixed, ready-to-feed formula, and sterile supplies, or will they be subject to having to use potentially unsafe water, mixing and feeding supplies?
7) If this were to become practice, how will it be possible to ensure that infants receive the formula only once/day with safe, clean supplies, and what are the risks of this protocol quickly leading to supplementation at higher rates and thereby reducing breastfeeding duration?
8) What measures will be taken to protect a mother’s milk production when a newborn is receiving a human milk substitute when it is known that supplementation of infants without alternative methods of milk expression lowers maternal milk supply through feedback inhibition?
9) Why will only randomized participants receive increased monitoring of infant weight allowing for more “prompt referral of infant growth problems,” and “extra instruction in breastfeeding recommendations” rather than all participants?
10) If the widespread supplementation of breastfeeding infants became commonplace, what consideration will be given to over-nutrition given the association of overweight and obesity associated with higher early growth rates as infants? Would we be taking one set of problems and replacing it with another?
11) If this were to become a widely-accepted practice, how would mothers be able to obtain and afford the formula needed for supplementation? For example, Similac ready-to-feed formula is as much as $8.99 for 8 bottles retail – so $30 per baby for this intervention… In 2019, the per-capita health expenditure per person in Uganda was $32.408 (source: World Bank). How would this not lead to the introduction of other liquids and foods, particularly in situations where the formula is hard to come by?
12) How would the use of formula for an approved medical study not lead to increased supplementation of other infants of normal birthweight, thus affecting overall community rates of exclusive breastfeeding?
13) Were other methods of supplementation considered, such as pasteurized donor milk (shelf-stable or otherwise) or increasing maternal supply through milk expression?
14) This study takes place in two African countries with GDPs of less than $850 per capita. Would this study be approved in a higher income country, or for that matter, in a country with a larger white population? Positive results for this study, and the study alone, are likely to result in increased market share for formula companies on the African continent, to the detriment of the mothers and infants there.

The World Health Organization (WHO) recently released their report on the marketing practices of the $55 billion commercial formula industry, and created a hashtag to “end exploitative marketing.” It is striking that the annual advertising budget of $3-5 billion for these companies to target mothers and healthcare providers exceeds that of the entire yearly budget of the WHO for all initiatives. In their report, the WHO describe an industry with highly advanced and targeted methods, including regularly distorting scientific information. Formula companies make claims that are inconsistent with the evidence, and serve to exploit innate maternal anxieties, thereby undermining a mother’s confidence in her ability to feed and care for her baby. We are concerned that this study is a result of, and will be used for, these very purposes. Given our concerns and questions outlined above, it is difficult to imagine a situation in which this study and any others like it would not lead to further adoption of unhealthy practices and exploitative marketing.
Signed,
The Academy of Breastfeeding Medicine, Board of Directors The Academy of Breastfeeding Medicine is a physician organization with over 1,000 members worldwide dedicated to educating and empowering health professionals to support and manage breastfeeding, lactation and human milk feeding. We strive to promote healthier lives across the globe through excellence in the medical care of breastfeeding and lactation.